Parr’s Heat Pump & Refrigeration Centre are proud to be Silver sponsor of White Cloud Foundation‘s yearly event, The Matthew Millhouse Salute, held on the last Sunday in March each year.

The annual event, in its fourth official year, challenges participants to paddle, run, pack march or walk to raise awareness for issues arising from depression, anxiety, perinatal depression and post-traumatic stress disorder in veterans and their families. The Salute has raised over $30,000 in the last three events with 2019 raising its largest total to date of $14,000.

On Sunday, 29 March 2020 participants will be able to choose between kayaking, running, pack marching or walking to and from Bellerive Beach. The day will start with a welcome by the event’s Patron, Garth Callender, followed by a short military ceremony in Matthew’s honour consisting of The Last Post before the ‘starting gun’ sounds. This is a wonderful motivator for participants, an annual tradition and something that is particular to The Salute. 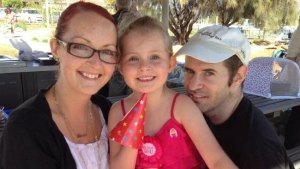 Established in 2016 in honour of Trooper Matthew Millhouse who passed away on 28 August 2015 from Young Onset Dementia. Matthew’s light armoured vehicle was involved in a car bomb explosion in Iraq in 2004. Matthew was knocked unconscious momentarily which ultimately led to his dementia diagnosis 9 years on. Matthew was 36 years old and is survived by his wife, Terese and their now 9 year old daughter, Eleanor.

Matthew and Terese have been supporters of the White Cloud Foundation since 2013 when they became aware of the organisation and its quest to raise awareness and funds to support early intervention of depression, anxiety and PTSD. Matthew was also diagnosed with these illnesses, and Terese continues to manage depression and anxiety following Matthew’s death. Terese has been working with White Cloud and The Matthew Millhouse Salute Committee since Matthew’s passing to bring the event to life.